Leopold II, King of the Belgians 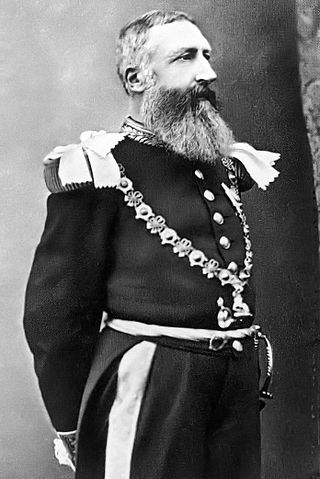 Leopold II, King of the Belgians, was the second monarch of Belgium and is known for his exploitation of the Congo Free State for his personal gain and the atrocities committed against the native people. Leopold Louis Philippe Marie Victor was born in Brussels, Belgium on April 9, 1835. He was the second-born but first surviving child of King Leopold I of the Belgians and his second wife Louise-Marie of Orleans, daughter of  Louis-Philippe I, King of the French and Maria Amalia of the Two Sicilies.
Leopold II’s father was formerly Prince Leopold of Saxe-Coburg-Saalfeld. He was asked to become kIng of the newly-independent Belgium in 1831. King Leopold I was the uncle of both Queen Victoria and her husband Prince Albert of Saxe-Coburg and Gotha and so Leopold II was the first cousin of both Victoria and Albert. Leopold II’s mother died of tuberculosis when he was fifteen-years-old.
Leopold II had three siblings: 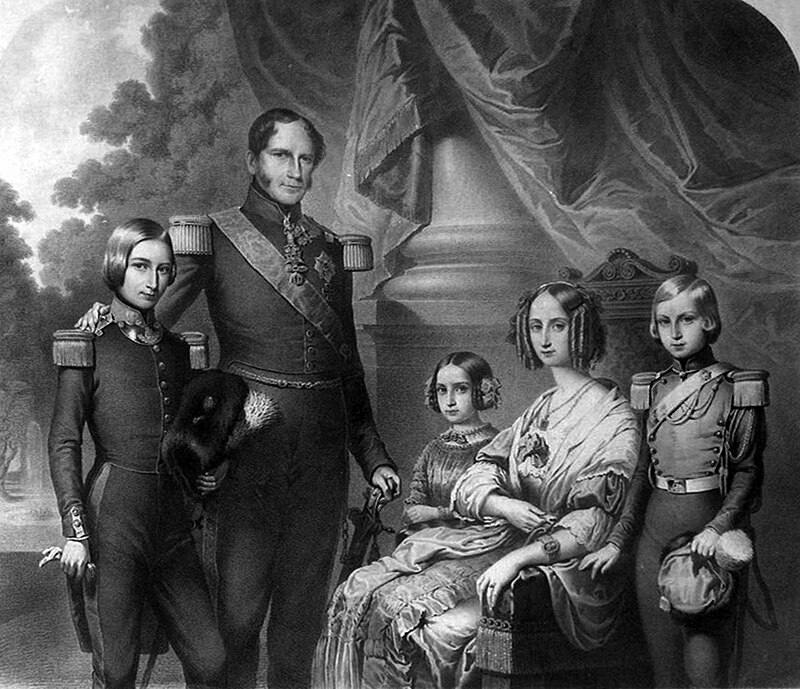 Leopold on the left, with his family; Credit – Wikipedia

When Leopold was nine-years-old, he received the title of Duke of Brabant, now the traditional title of the heir apparent to the Belgian throne, and was appointed a sub-lieutenant in the army. Leopold served in the military until he became king in 1865. 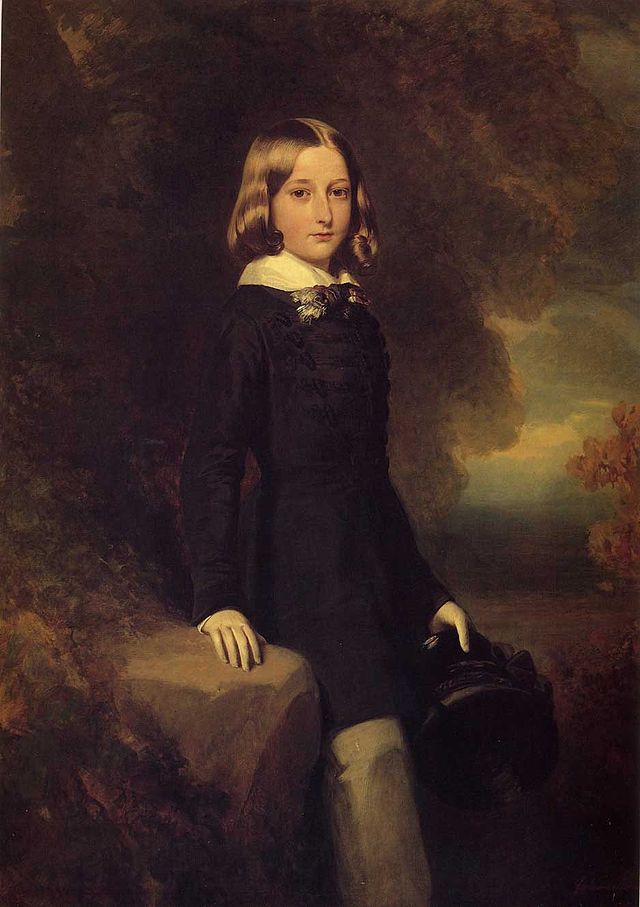 On August 22, 1853, eighteen-year-old Leopold married sixteen-year-old Marie Henriette of Austria, daughter of Joseph, Archduke of Austria and his third wife Maria Dorothea of Württemberg. The marriage had been carefully orchestrated to strengthen the infant Belgian monarchy with a Protestant first king and a Catholic populace by marrying its future second monarch to a member of a prestigious Catholic dynasty.

The marriage was not a happy one, and the couple lived mostly separate lives. After the death of their only son, Leopold and Marie Henriette tried to have another son, but the result was another daughter Clémentine. The couple completely separated after the birth of Clémentine and in 1895 Marie Henriette moved to Spa, Belgium where she lived out the rest of her life at Hôtel du Midi, the home she had bought there.
Leopold believed that overseas colonies were the key to a country’s greatness. However, since the Belgian government showed little interest in overseas colonies, Leopold eventually began to acquire a colony as a private citizen. The Belgian government lent him money for this venture. On February 5, 1885, the Congo Free State, an area 76 times larger than Belgium, was established under Leopold II’s personal rule and a private army. Leopold amassed a huge personal fortune by exploiting the natural resources of the Congo.
The Congo Free State government used forced labor in the rubber industry which effectively enslaved the native population. Workers were beaten, mutilated, and killed if quotas were not met. Accurate records were not kept of these atrocities, but it is estimated that between two million to fifteen million were killed. Leopold took steps to limit the knowledge of the atrocities reaching the outside world. However, news of the atrocities eventually became known. In 1908, the Belgian parliament forced Leopold to cede the Congo Free State to Belgium. The Congo Free State was transformed into a Belgian colony under parliamentary control known as the Belgian Congo. After independence in the mid-20th century, the Belgian Congo was renamed as the Republic of the Congo, then Zaire, and is currently called the Democratic Republic of the Congo.

A child victim of Belgian atrocities in Congo stands with a missionary; Credit – Wikipedia

In 1914, American poet Vachel Lindsay wrote a poem called The Congo containing the following lines:
“Listen to the yell of Leopold’s ghost
Burning in Hell for his hand-maimed host
Hear how the demons chuckle and yell
Cutting his hands off, down in Hell.”
In 1998, King Leopold’s Ghost, a best-selling popular history book by Adam Hochschild, was published.  It explored the exploitation of the Congo Free State by King Leopold II as well as the horrible atrocities that were committed against the Congolese people. In June 2020, during the world-wide protests against racism after the police-death of American George Floyd in Minneapolis, Minnesota, a statue of King Leopold II was removed from a public square in Antwerp, Belgium. Many Belgians demanded the removal of all statues of King Leopold II.
Leopold had many mistresses giving him the nickname “The King of Belgians and the Beautiful Women,” but his most prominent and notorious mistress was Blanche Zélia Joséphine Delacroix, better known as Caroline Lacroix.  In 1899, Leopold met Caroline in Paris, France where she was working as a prostitute. Leopold was 65 and Caroline was 16. Their affair lasted until his death in 1909. Because Leopold gave Caroline large sums of money, estates, gifts, and a noble title, Baroness Vaughan, she was deeply resented by the Belgian people. Caroline had no scruples in appearing in public. She accompanied Leopold to the funeral of his first cousin Queen Victoria in 1901, causing a great scandal. Her unpopularity in Belgium dramatically increased once it was realized that the riches from the Congo were not benefiting the country, but rather Leopold and his mistress. Five days before his death, Leopold and Caroline married in a Catholic ceremony. However, the marriage was not legal as a civil marriage is required in Belgium. After Leopold’s death, his daughters and the Belgian government engaged in long-term legal battles to recover a $10,000,000 trust fund Leopold had placed in the names of Caroline and their two sons. Despite both the government and Leopold’s daughters eventually receiving some funds, Caroline remained a multimillionaire.
Caroline and Leopold had two sons together: 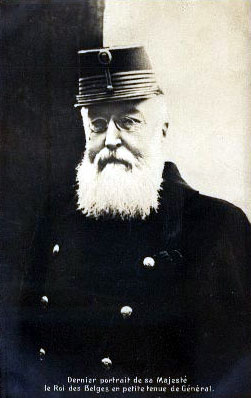 The last photo of Leopold II before his death;  Credit – Wikipedia

King Leopold II, aged 74, died on December 17, 1909, at the Palace of Laeken in Laeken, Brussels, Belgium, and he was succeeded by his nephew King Albert I.  At the time of his death, Leopold was extremely unpopular with the Belgian people and his funeral procession was booed. 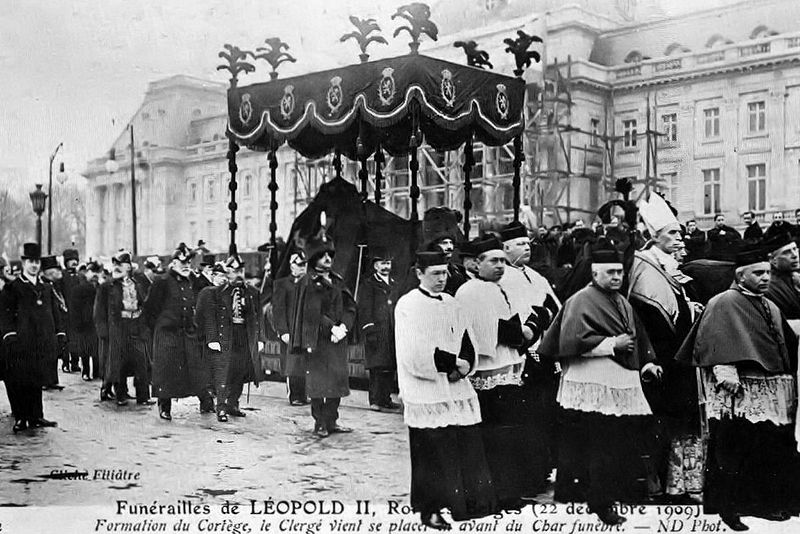 King Leopold was buried with his wife Marie Henriette, who had died in 1902, at the Church of Our Lady of Laeken in Brussels, Belgium.  Many Belgians remember Leopold II as the “Builder King” for his extensive public works projects, and many remain unaware of his part in the exploitation and atrocities in the Congo Free State.