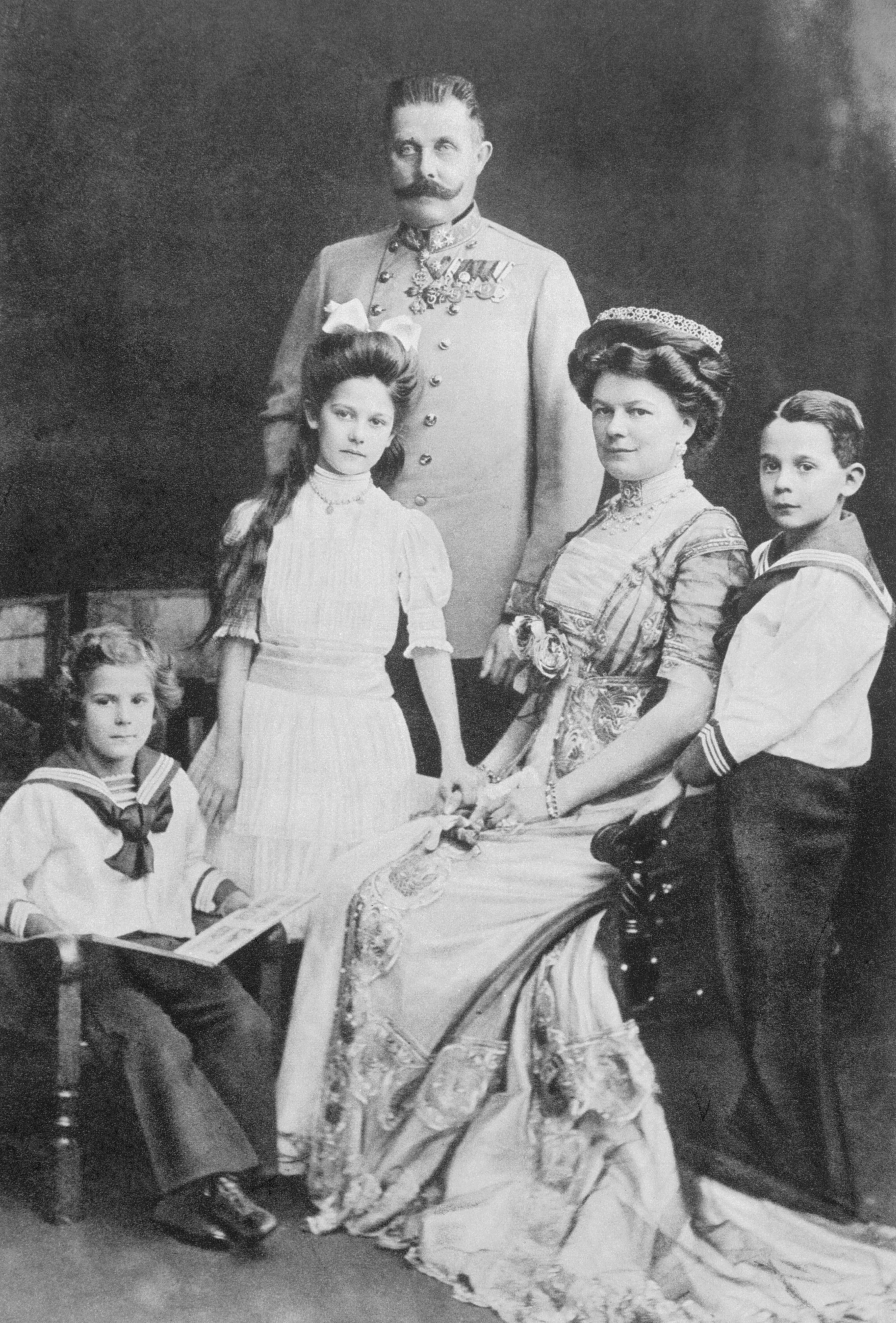 For many people, the name Archduke Franz Ferdinand immediately evokes his assassination in 1914 which led to a diplomatic crisis when Austria-Hungary delivered an ultimatum to Serbia.  In turn, this caused several alliances formed over the previous decades to come into play, and within weeks, the major powers were at war and the conflict soon spread around the world becoming World War I.
Franz Ferdinand was born on December 18, 1863, in Graz, Austria, the eldest son of Archduke Karl Ludwig of Austria and his second wife Princess Maria Annunciata of Bourbon-Two Sicilies. Archduke Karl Ludwig’s elder brothers were Franz Joseph, Emperor of Austria and Maximilian, the executed Emperor of Mexico. As his father’s first marriage to Margaretha of Saxony did not produce children, Franz Ferdinand was his father’s eldest son.
Franz Ferdinand had two younger half-siblings via his father’s third marriage to Infanta Maria Theresa of Portugal:
Franz Ferdinand’s life changed when his cousin Crown Prince Rudolf died by suicide in 1889 at his hunting lodge Mayerling.  Crown Prince Rudolf, the only son of Emperor Franz Joseph, had no sons, so the succession would pass to Emperor Franz Joseph’s brother, Archduke Karl Ludwig and his eldest son, Archduke Franz Ferdinand.  In a matter of days, Archduke Karl Ludwig renounced his succession rights in favor of his son Archduke Franz Ferdinand.
At the time Franz Ferdinand was unmarried.  In 1894, Franz Ferdinand fell in love with Countess Sophie Chotek von Chotkow und Wognin, the daughter of Count Bohuslaw Chotek von Chotkow und Wognin and Countess Wilhelmine Kinsky von Wchinitz und Tettau.  Because Sophie was not a member of a reigning or formerly reigning family, she could not marry a member of the Imperial Family.  Franz Ferdinand refused to give Sophie up and he was helped in his efforts to marry her by Archduchess Maria Theresa (born Infanta Maria Theresa of Portugal), Emperor Franz Joseph’s sister-in-law and Franz Ferdinand’s stepmother.
The emperor finally agreed to the marriage, but there were some catches.  Franz Ferdinand would keep his place in the succession, but Sophie could never be empress and their children would never have succession rights.  Prior to the marriage, Franz Ferdinand had to sign an agreement in front of the whole court declaring that Sophie would be his morganatic wife, would never bear the titles of empress, queen, or archduchess, and acknowledged that their descendants would not be in the line of succession.
Sophie and Franz Ferdinand were married on July 1, 1900, at Reichstadt (now Zákupy in the Czech Republic).  The only members of the Imperial Family to attend the wedding were Franz Ferdinand’s stepmother Archduchess Maria Theresa and her two daughters Archduchess Maria Annunciata and Archduchess Elisabeth Amalie.  Upon marriage, Sophie was given the style and title Her Serene Highness Princess of Hohenberg and in 1909, she was given the higher style and title Her Highness Duchess of Hohenberg.  Sophie never had the precedence of her husband and at functions, she was forced to stand or sit far away from her husband.   Franz Ferdinand and Sophie had three children, two sons and a daughter.
There was one loophole in which Sophie could share her husband’s precedence and that was when he was acting in a military capacity.  Emperor Franz Joseph sent Franz Ferdinand to Sarajevo, Bosnia to observe military maneuvers and Sophie accompanied him out of fear for his safety.  After the military maneuvers, the couple was to open a state museum in Sarajevo. The Black Hand, a secret military society formed by members of the Serbian Army, conspired to assassinate Archduke Franz Ferdinand on his visit to Sarajevo.  Seven conspirators were in the crowds lining the streets of Sarajevo on June 28, 1914, each ready to assassinate the Archduke should there be an opportunity.  One attempt, a bomb thrown at the archduke’s car, failed.  Later, after a reception at the Town Hall, 19-year-old Gavrilo Princip saw his chance and fired two shots at the couple as they rode in their car.  The first shot hit Sophie in the abdomen and the second shot hit Franz Ferdinand in the neck.  Sophie died soon after being shot and Franz Ferdinand died about 10 minutes later.

The bodies of the Archduke and his wife were transported to Trieste, Italy by the battleship SMS Viribus Unitis, the same ship that the couple used to travel to Sarajevo.  From Trieste, a special train took the bodies back to Vienna.  Because Sophie was not a member of the Imperial Family, she could not be interred at the Imperial Crypt in Vienna.  Instead, Archduke Franz Ferdinand and Sophie, Duchess of Hohenburg were buried at Artstetten Castle in Artstetten-Pöbring, Austria with only immediate family in attendance.
The death of Franz Ferdinand was probably particularly difficult for the 84-year-old Emperor Franz Joseph to deal with as he had suffered the tragedies of the execution of his brother Maximilian, Emperor of Mexico in 1867, the suicide of his son Crown Prince Rudolf in 1889, and the assassination of his wife Empress Elisabeth in 1898.  Emperor Franz Josef died in 1916 and was succeeded by his grandnephew Karl, the last ruler of the Austro-Hungarian Empire.

Memorial Plaque of Archduke Franz Ferdinand and his wife Sophie, Duchess of Hohenberg in the Imperial Crypt in Vienna; Photo Credit – Susan Flantzer

Powered by WordPress | Designed by TieLabs
© Copyright 2021, All Rights Reserved
We use cookies to ensure that we give you the best experience on our website. If you continue to use this site we will assume that you are happy with it.Ok